The Magic of Monadnock: Poetry That Bridges Continents 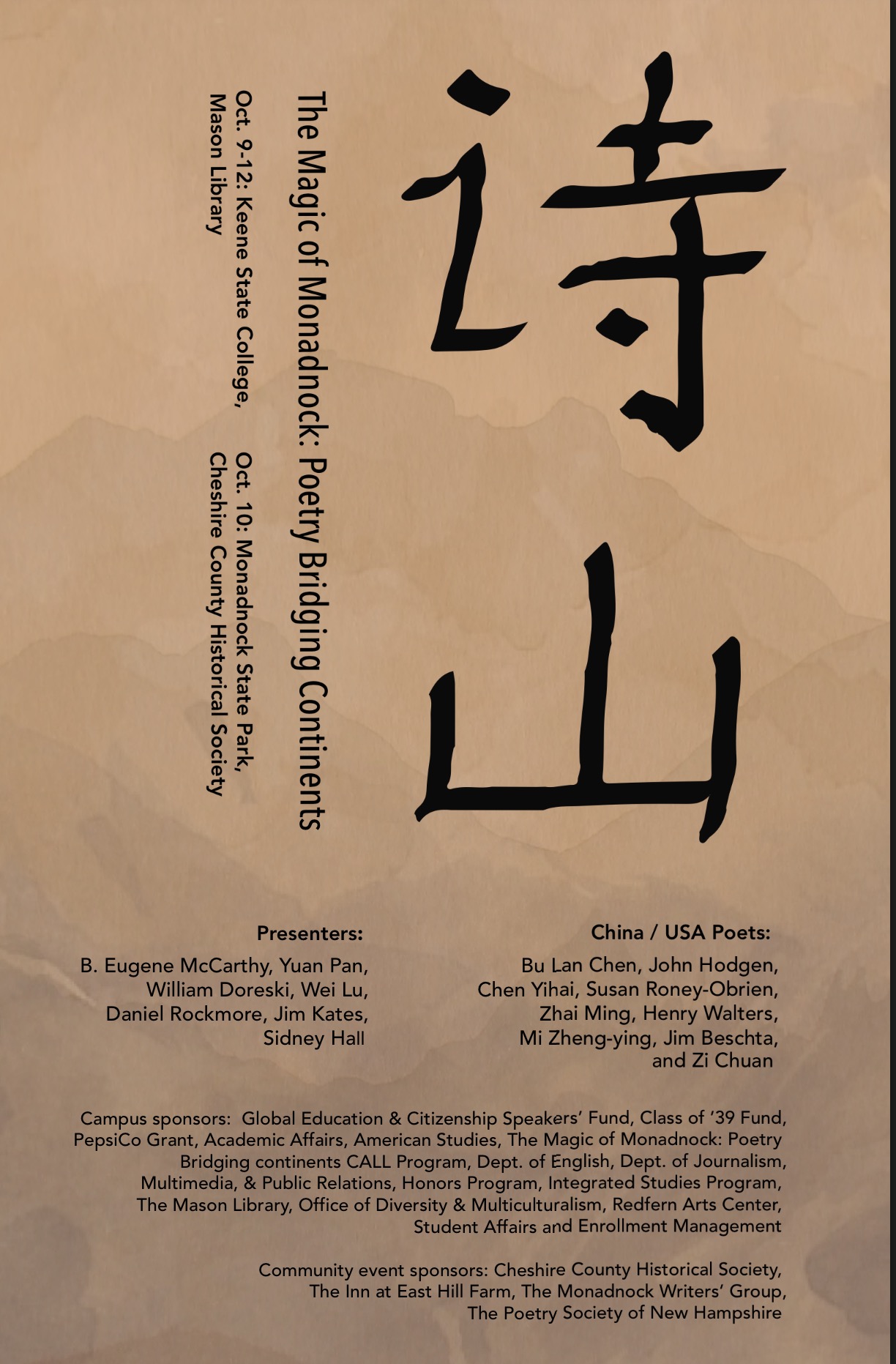 Geology has a way of grabbing writers’ attention, especially when that geology thrusts itself in a lonely fashion, a few thousand feet above a plain where lots of artists hang about as Maoshan does in China or Mount Monadnock does in New Hampshire. 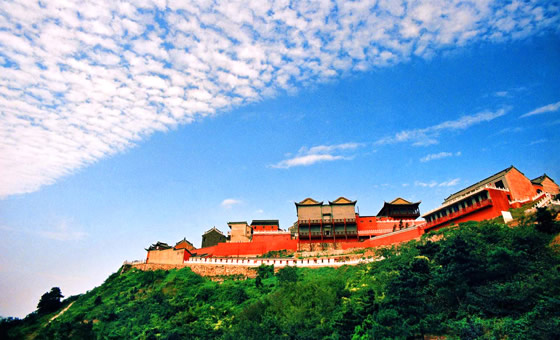 Li Po [or Li Bai (701–762), also known as Li Bo] fell under that spell again and again. Even his titles mention mountains over and over and they occur within the poems themselves such as this one where he mentions the Taoist Maoshan directly:

You, rare treasure of our time, oh, gone too young.
I’ve missed your funeral, and like heavy air,
the sorrow weighs.
Now your grave is covered with autumn grass.
I want to give my sword for you, but don’t know how
to choose, at the edge of this grave,
a suitable branch to hang it.
Though I haven’t died of crying before this place,
this Maoshan,
I’ll shed tears on the road to Danyang,
back and forth,
the rest of my life.
Translated by Zhang Ziqing,
Edited by Rodger Martin (For All The Tea in Zhōngguó)

Emerson and Thoreau noticed the effect as well and highlighted the long literary trail that attaches itself to Mount Monadnock which, as Interpretative Ranger Brittany O’Neal reminded us in our October Pilgrimage to Thoreau’s Rock, drew over 160,000 climbers in 2016 (and that number only includes those who registered through the state park). That’s today and Thoreau and Emerson were then, but even in Thoreau’s time there was scorn for those who simply climbed to reach the summit when he noted in his journal:

“Those who climb to the peak of Monadnock have seen but little of the mountain. I came not to look off from it, but to look at it. The view of the pinnacle itself from the plateau below surpasses any view which you get from the summit. It is indispensible to see the top itself and the sierra of its outline from one side…. It is remarkable what haste the visitors make to get to the top of the mountain and then look away from it.” 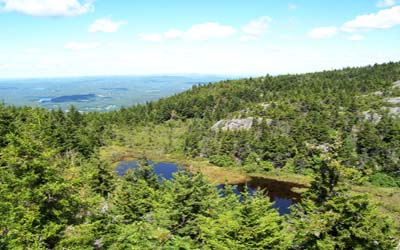 Therefore, on Wednesday, October 11, 2017, as part of the week-long Magic of Monadnock Colloquium: Poetry Bridging Continents which acted as a cultural exchange between poets from American and poets from China (despite three whom the United States Government denied entry visas—such has become the state of American leadership’s insecurity to any mirror image which does not reflect exactly like itself that it even fears poets ). a group of eight led by Ranger O’Neal climbed Thoreau’s route to his rock not to the peak, determined to pay homage to the magic of this mountain in a place Thoreau himself had done so. 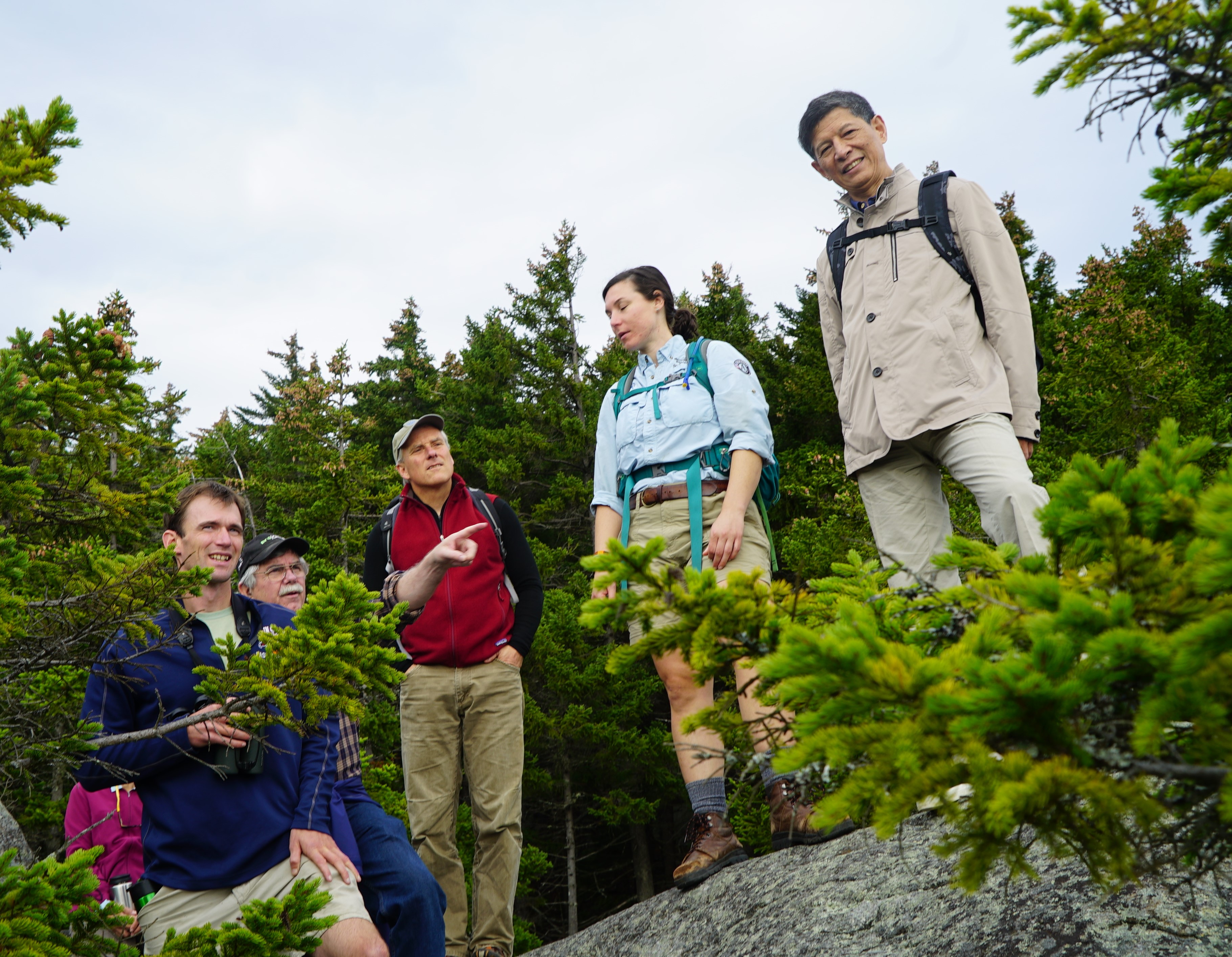 Once at Thoreau’s Rock, Mark Long, Director of the Integrated Studies Program at Keene State College read A. R. Ammons’ poem “For Harold Bloom” which as critic David Lehman noted in his introduction to Ammons’ Selected Poems indicated Ammons saw climbing simply to reach a mountain’s peak the same way Thoreau saw it: When the poet reaches the “summit, … he feels a certain desolation or emptiness”: 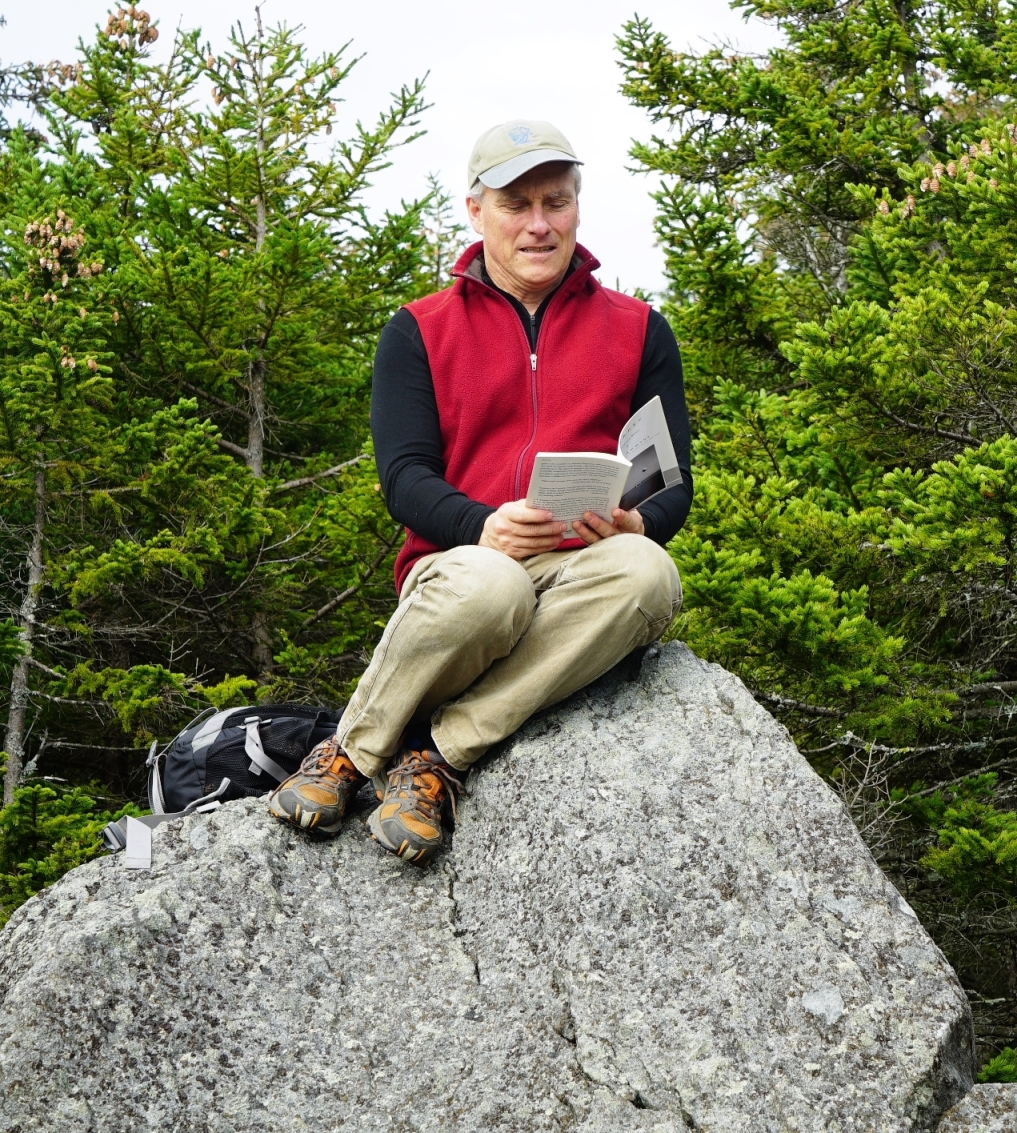 Indeed there was magic and longing at this granite outcropping as the nine of us read and listened to the words of these two American poets and then the words of Chinese pastoral poet Chen Yihai and finally the calligrapher Zichuan who read his calligraphy in the ancient way—that is to say–it must be sung. And Zichuan sang, and the song floated into the sky among the Vs of geese flying south and an autumn ablaze in color. 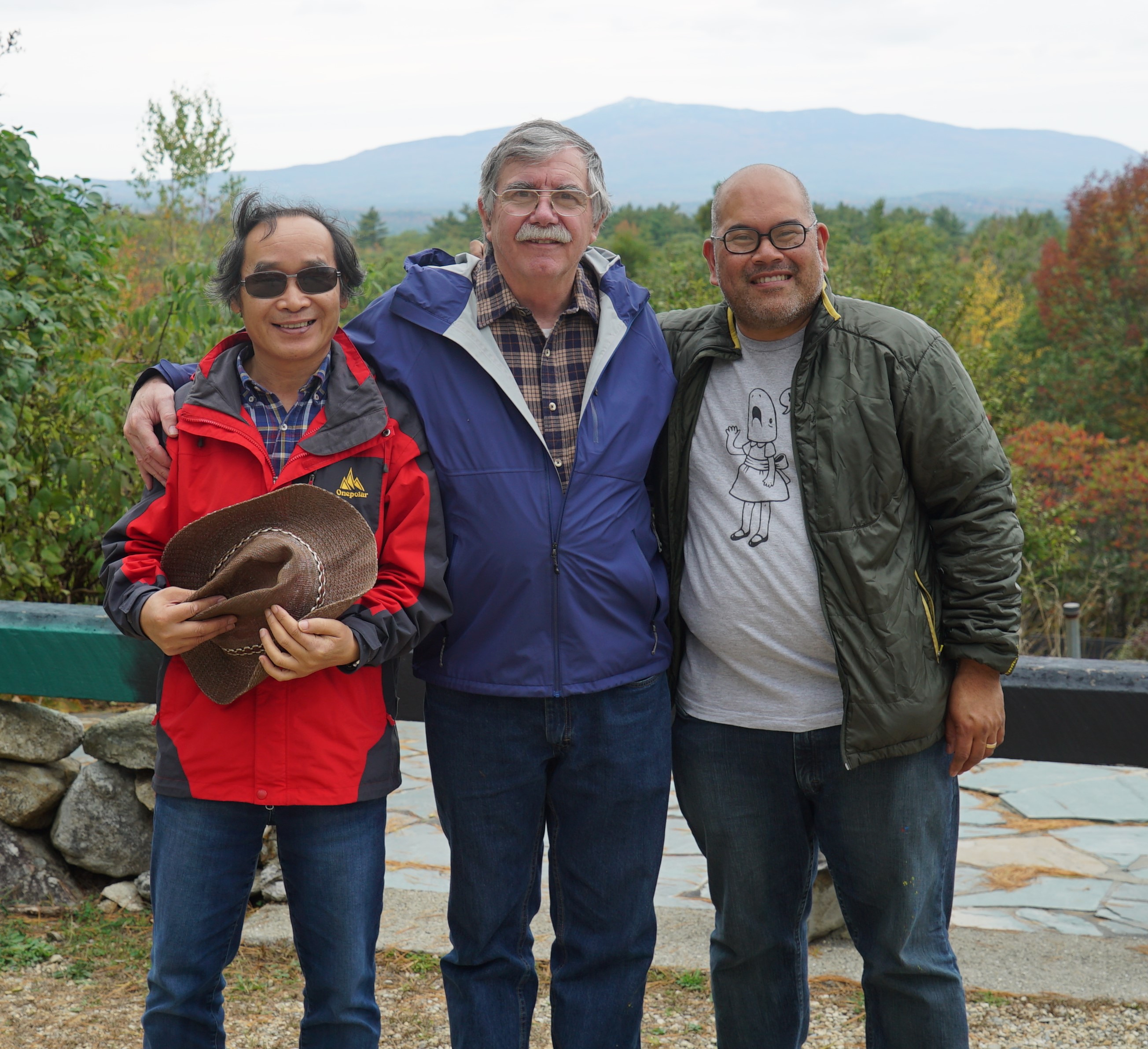 And so it was all week as poets, and lovers of poetry gathered around The Grand Monadnock for a week of poetry in two languages.

Two years ago, as I ascended or descended the stairways inside the Department of Foreign Languages at Shanghai University of International Business and Economics (SUIBE) I was struck by how each stairwell displayed a prominent quote in English by Henry David Thoreau. Whether those quotes were window dressings or carried weight with the Chinese citizens who also daily ascended and descended those stairs was amply answered when five poets from China accepted Keene State College’s invitation to visit the Monadnock Region and hike to Thoreau’s rock on Mount Monadnock. The earlier blog spot deals with that hike. But the week was more than that hike, for example, exactly where else can one get 46 students, poets, and community members together to create nine-linked verses we call American Rengas. The renga is an Asian form of linked verse taught me by Boston poet Steven Rattimer at a New England Artists Trust conference decades ago. An American renga is an expanded form of that style which permits us to add color and art to replace calligraphy in lines of linked poetry created on the spot by a group of writers. The process has a mathematical progression which allows each participant an opportunity to create equal lines of poetry and art in a joint verse. 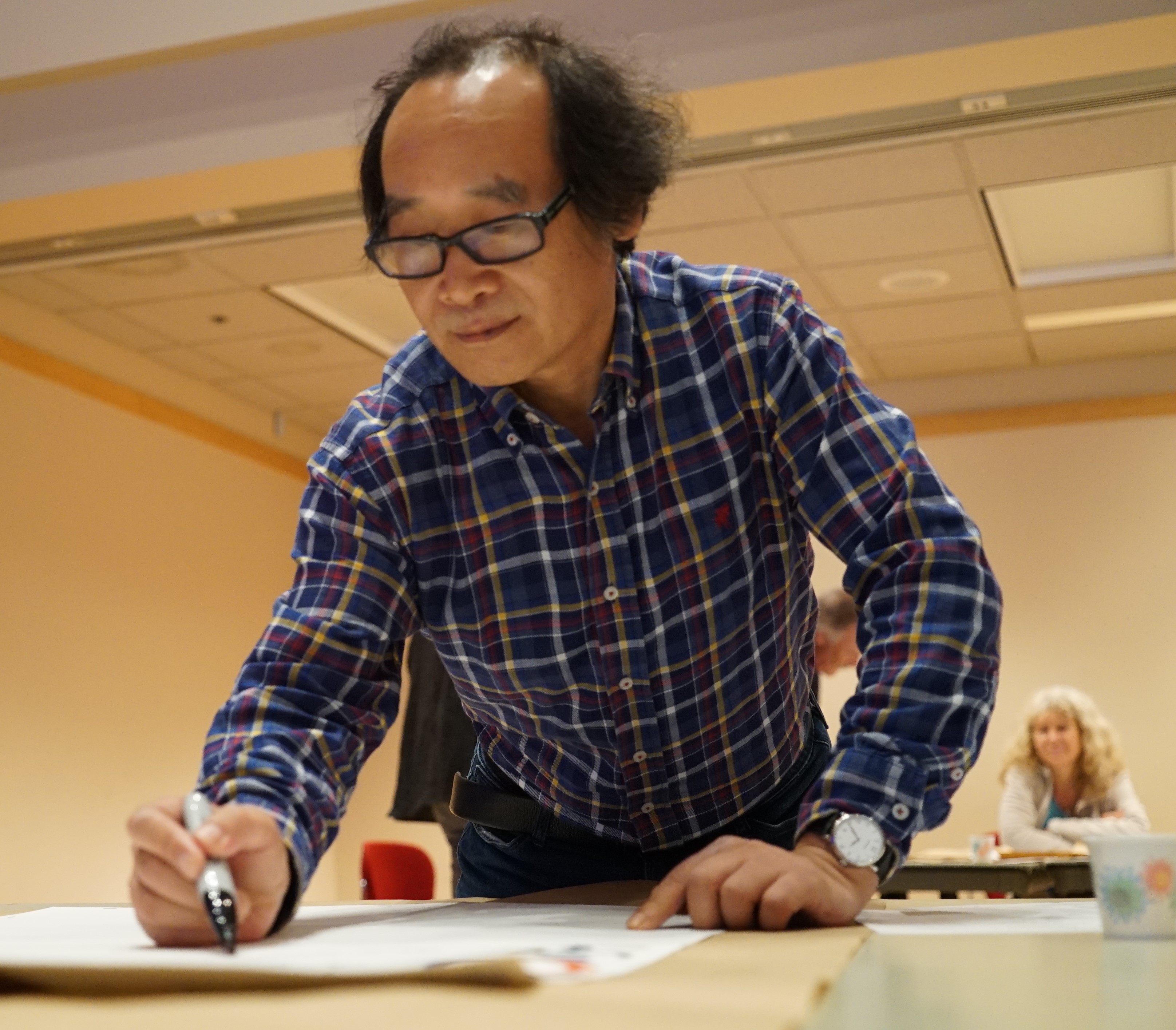 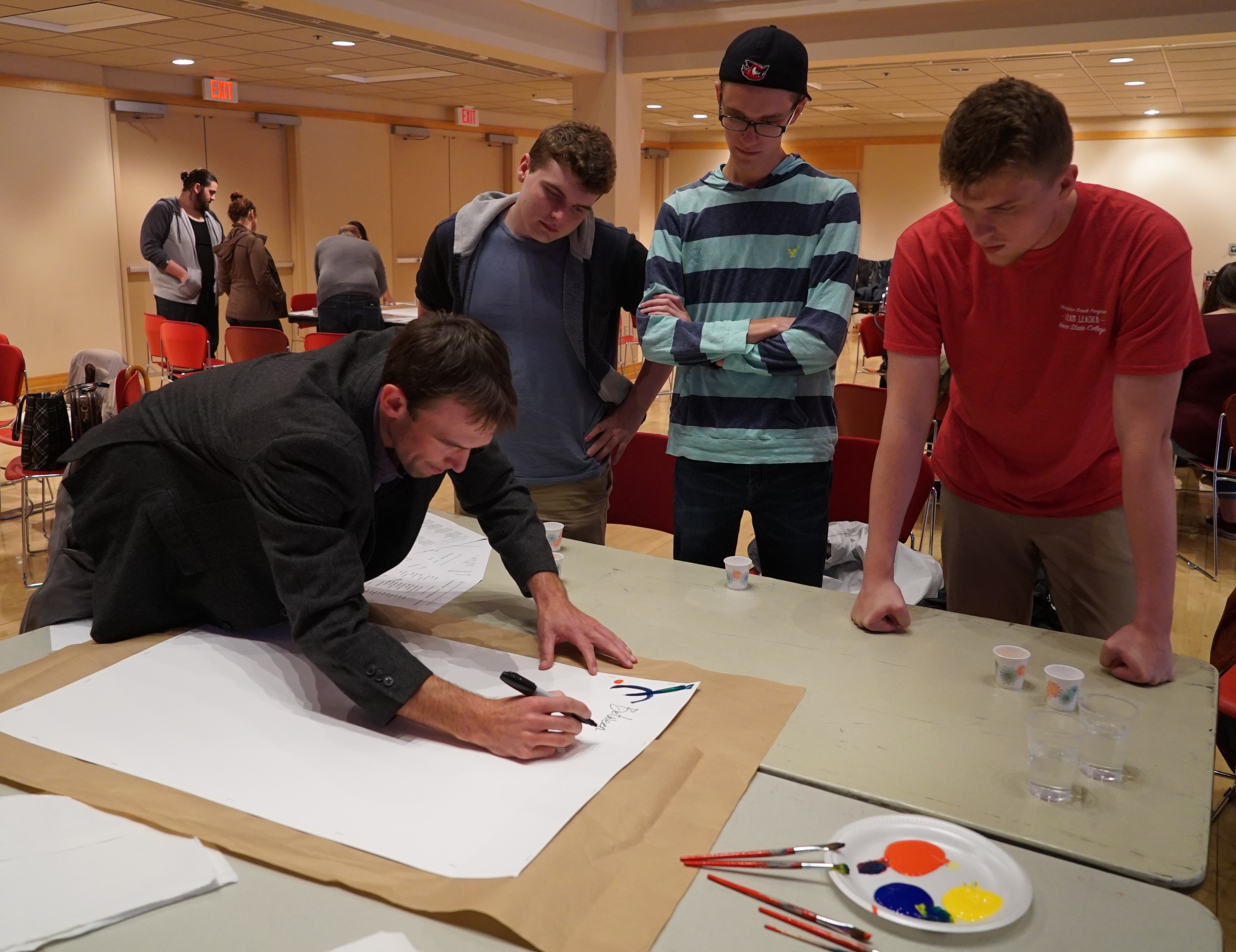 Poet Henry Walters begins as renga line while others await their opportunity.  Photo by C. Yihai

A Quatrain
by Chen Yihai

Also during that week the visiting poets got to mingle with a more modern-day American Thoreau-like poet named Henry Walters who resides in his own Walden-like creation on a rocky spine above the campus of the Dublin School. Inside Walters treated his visitors to a Brahms piano piece he played on an upright piano he somehow managed to fit snugly into his cabin. This is something the one-dimensional thinkers of Silicon Valley don’t quite understand—that flat screen depiction of reality is no more real than the cartoons of our youth. It may depict a picture of reality, might even sound like reality, but it is a miniature, flat reality. It doesn’t smell, feel, or taste like reality—even if down the road someone will try to add those features. All the video in the world cannot replace the sense of sitting on Thoreau’s Rock and listening to one another sing poetry or sip tea in Henry Walter’s cabin as he plays Brahms. 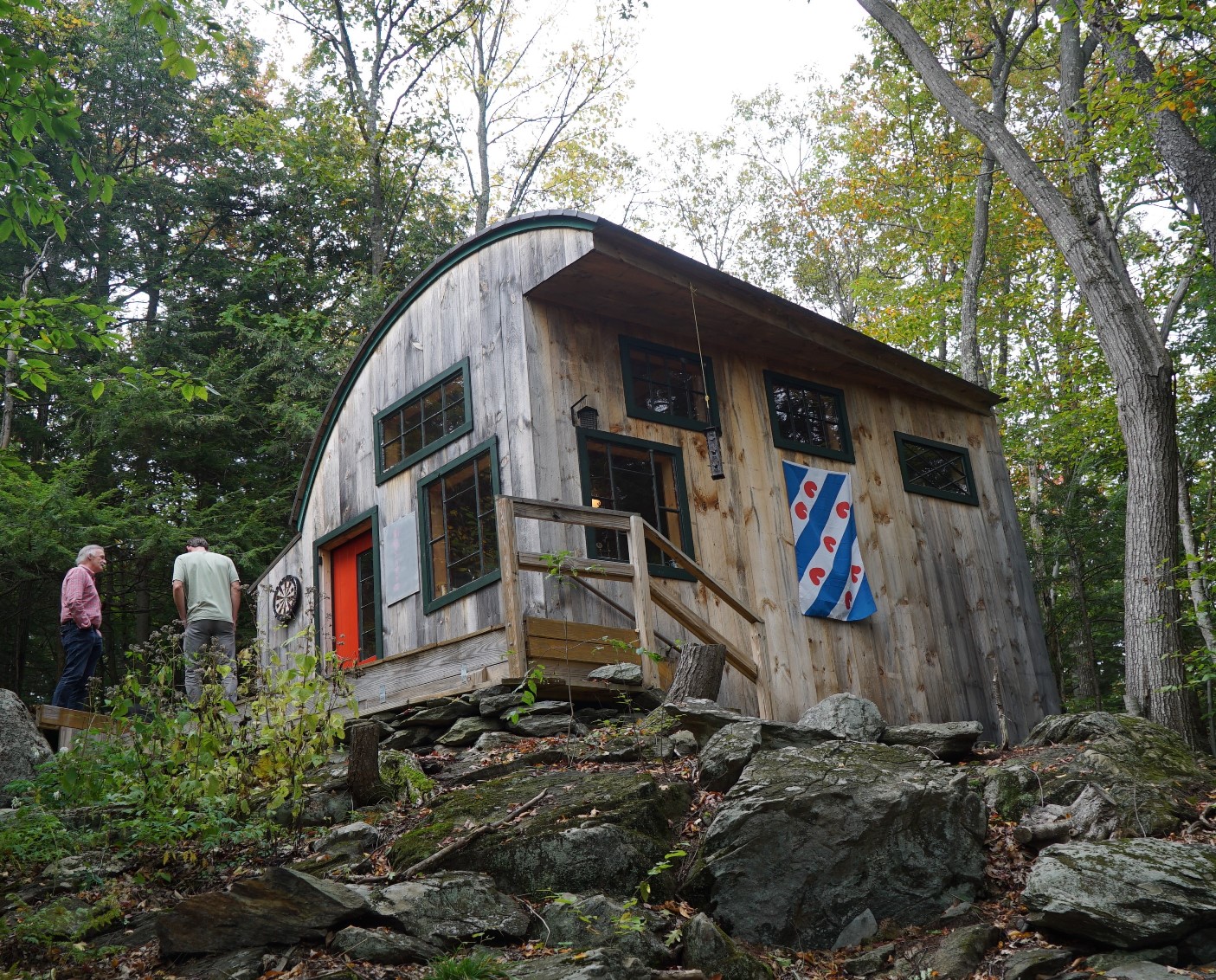 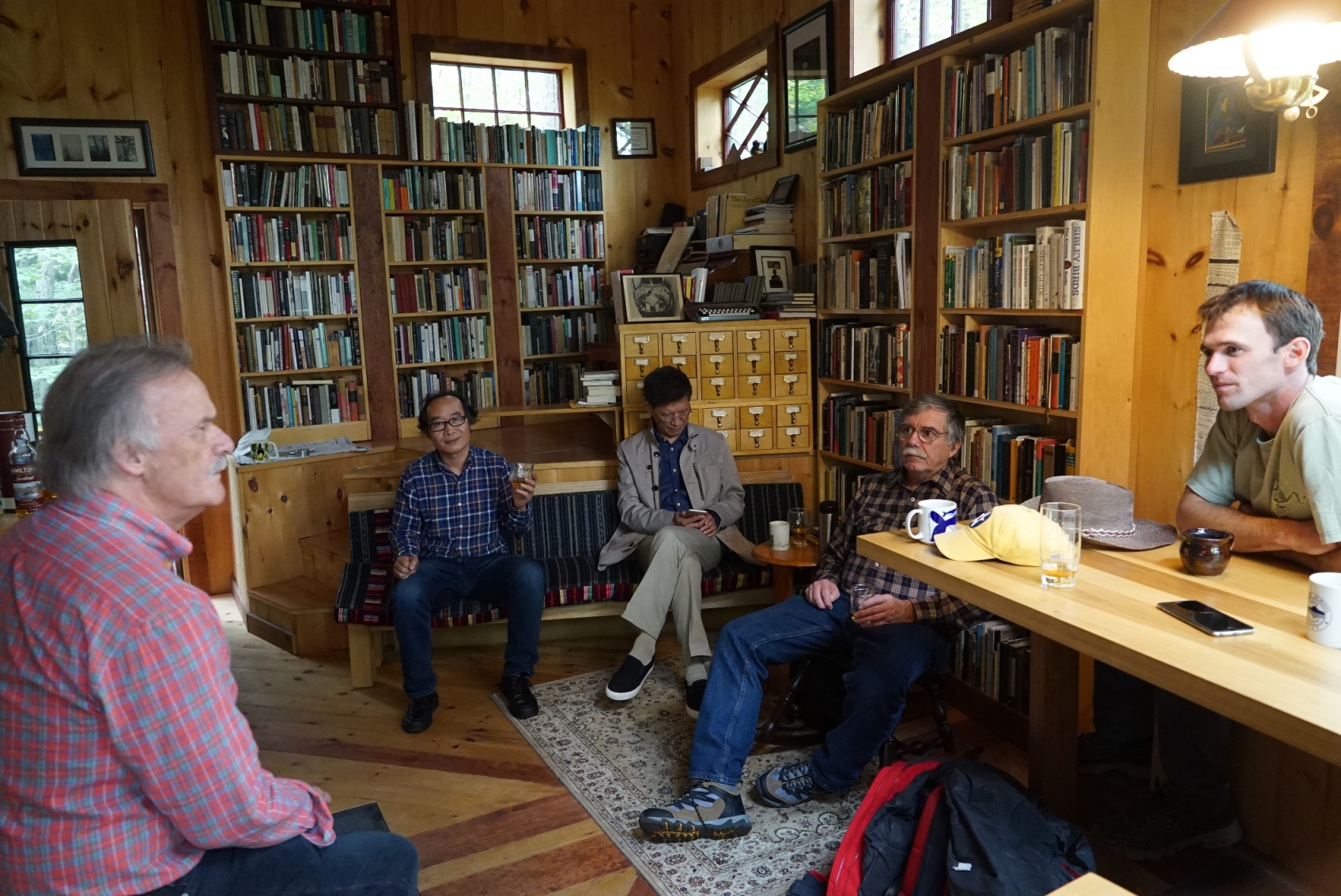 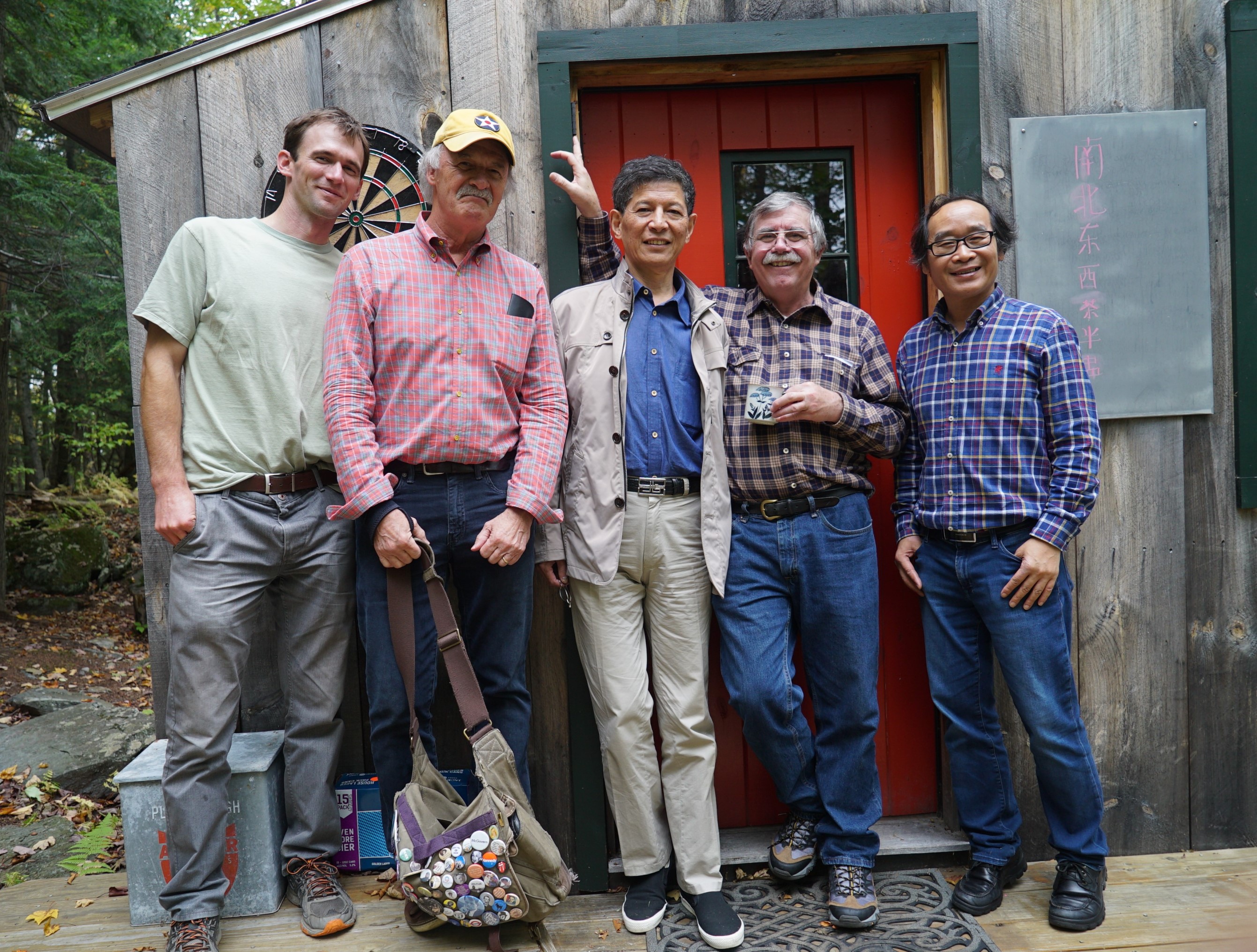 Outside the cabin.  Photo: R Obien

Earlier all gathered for an upstairs meal in the Keene building once owned by Thoreau’s mother’s family and a place he stayed during his Monadnock visits. Later we gathered at the Historical Society of Cheshire County to hear poetry in two languages and music by classical guitarist David Gru6under. Families even brought their children. Imagine, in Keene, New Hampshire, families bring children to hear poetry. And the children, as attentive as I, listened to those sounds of Mandarin and understood that definitions are only 30 percent of communication—the body delivering those definitions provides the other 70 percent. 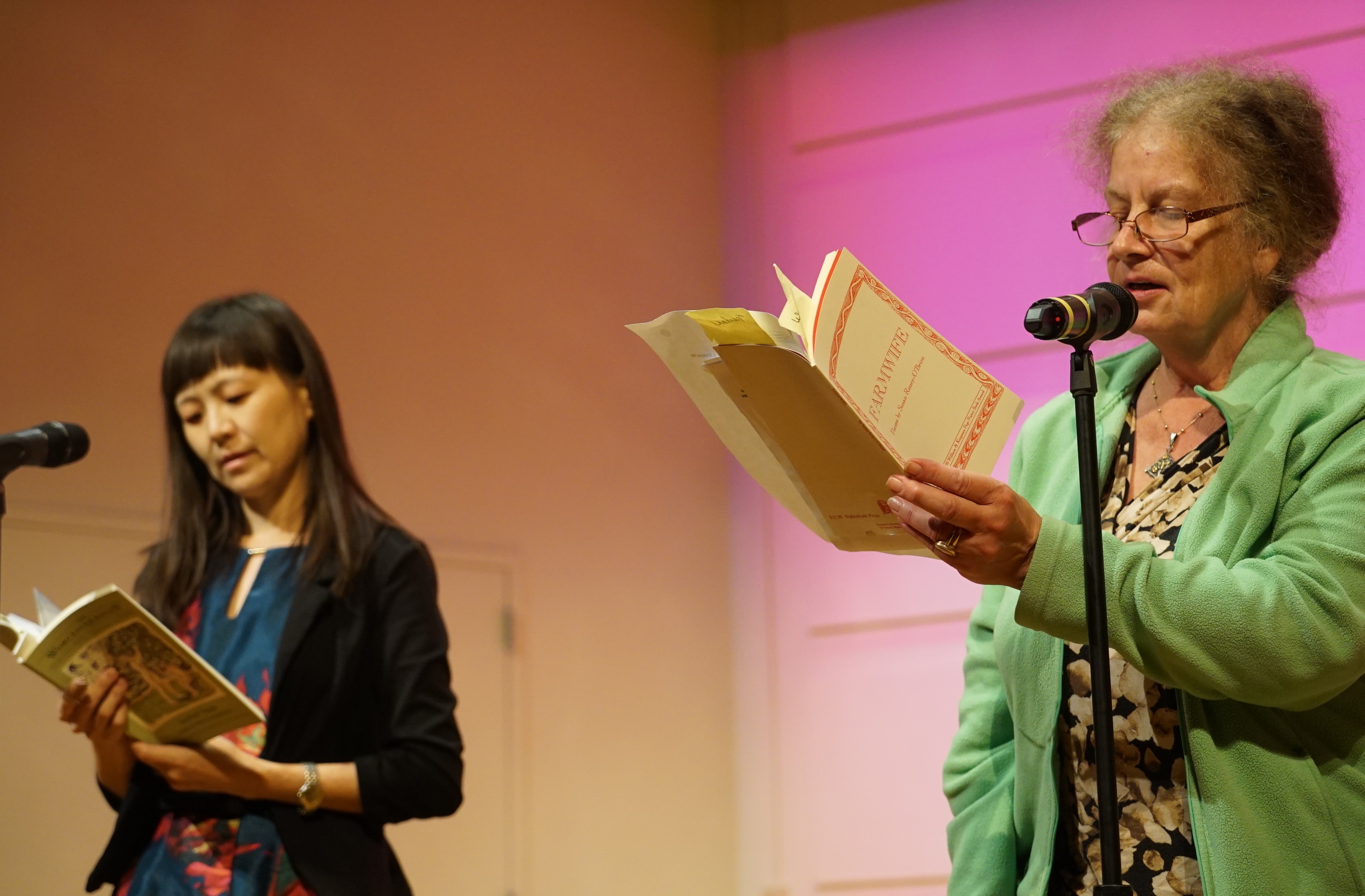 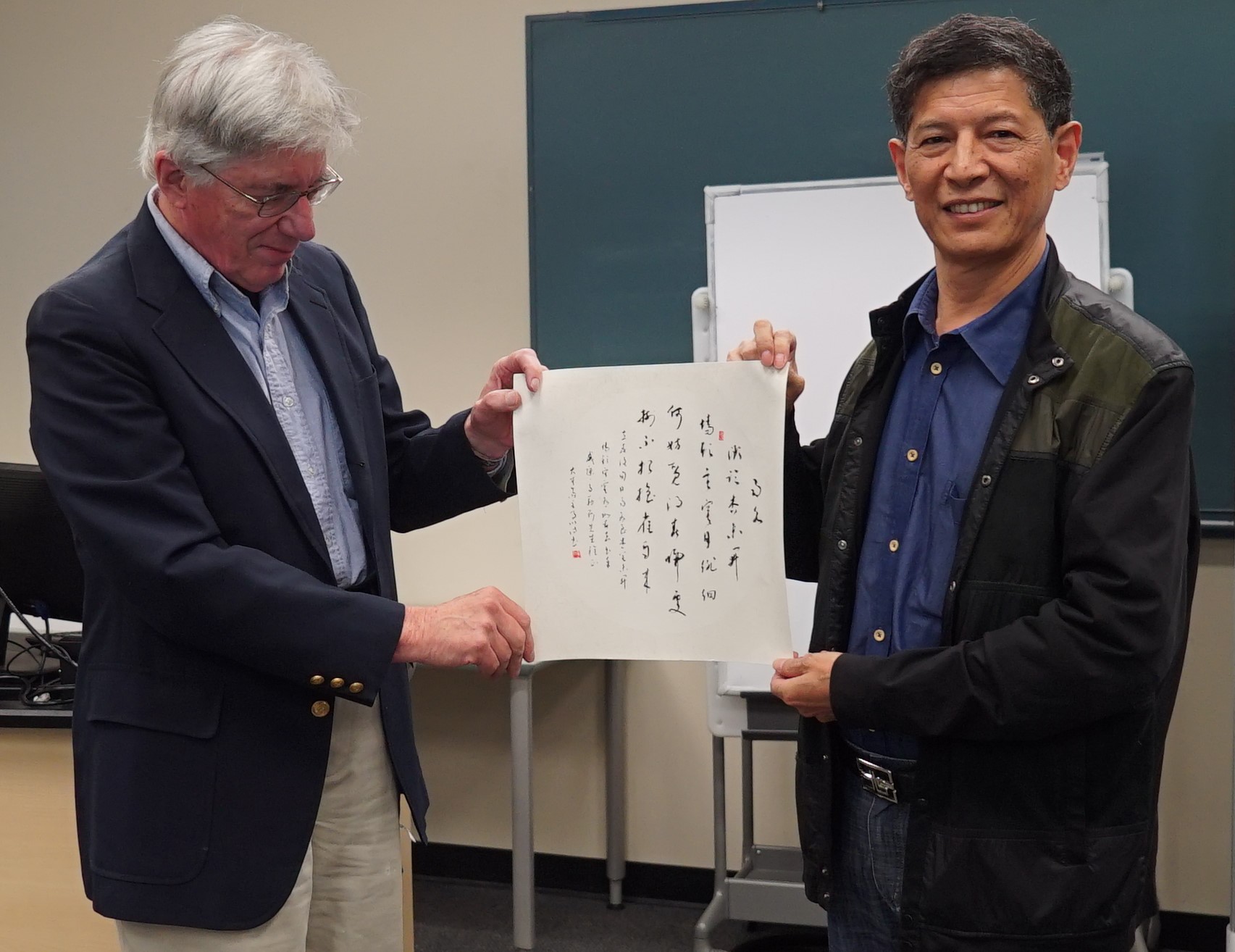 But after Chen Yihai and Zi Chuan returned to China, the poetry doesn’t stop in the Granite State. A few weeks later an e-mail came across my transom that New England College theater students and their director had created a theater piece titled “Allowances” using fifty poems of witness as its script. And there at the small theater in the only Henniker on Earth, I listened to a group of NEC students use music, dance, and song both poetic and literal to put to shame the idea that America is a white-bread frozen meal waiting to be popped into a microwave for a quick bite to eat. No, even the occasional forgotten line could not demonstrate more clearly that this nation is at its best when it’s a bubbling melting pot of stew simmering on the stove.

The wind can not stir a ripple
on the icy surface of the pond.
Like crystal and amber a few
brown leaves have embedded themselves
in the ice. A hole for a water bucket
gapes near the pier’s springboard.
Nearby water chestnuts and arrowheads
hide deep within the frozen rice paddies
where dry plants rustle in the cold wind.
In front of the frozen pond, it’s hard to imagine
how large the area water chestnut leaves spread
with their white flowers clustered
in the summer of 1970[1], as if water chestnuts
were lifted overnight. But vividly I remember
the water caltrop-picking girl who sat
on the small boat with red dragonflies overhead.
I reached to give her a hand
when suddenly her boat overturned
and she fell into the water.
When she waded ashore her soaked clothes
exposed the lines of her body.
Afterward, she blushed with shame
whenever she saw me.
That winter, she married,
floating away in a boat.
translated by Zhang Ziqing
edited by Rodger Martin

[1] It refers to the second year when Zi Chuan came to the countryside.