“Rivers were made … in heaven.” Robert Frost

In a 2019 a poetry exchange that has now spanned four years, seven poets and scholars from China visited New England as part of the fourth Poetry Bridging Continents symposium. This is a brief summary of that event.  As you will see, many of the pastoral poetry retreat members have particpated in these exchanges.

After an overnight stay with hosts Carl & Lynda Mabbs-Zeno in Peterborough, New Hampshire, and the New Pastoral Poetry House in Hancock, the group participated in a joint ekphratic exhibit/reading at the Jaffrey Civic Center, Jaffrey, New Hampshire. Artists Susan Wadsworth and poets Susan Roney-O’Brien, Chen Yihai and Zi Chuan who read with poets Kim Peavy, Denni Dickler and Eric Poor as they read their poems in response to Wadsworth art, many in both in English and Mandarin—a fortuitous exchange since Kim Peavy then invited the poets to visit her organic farm and draft horses later in the week. 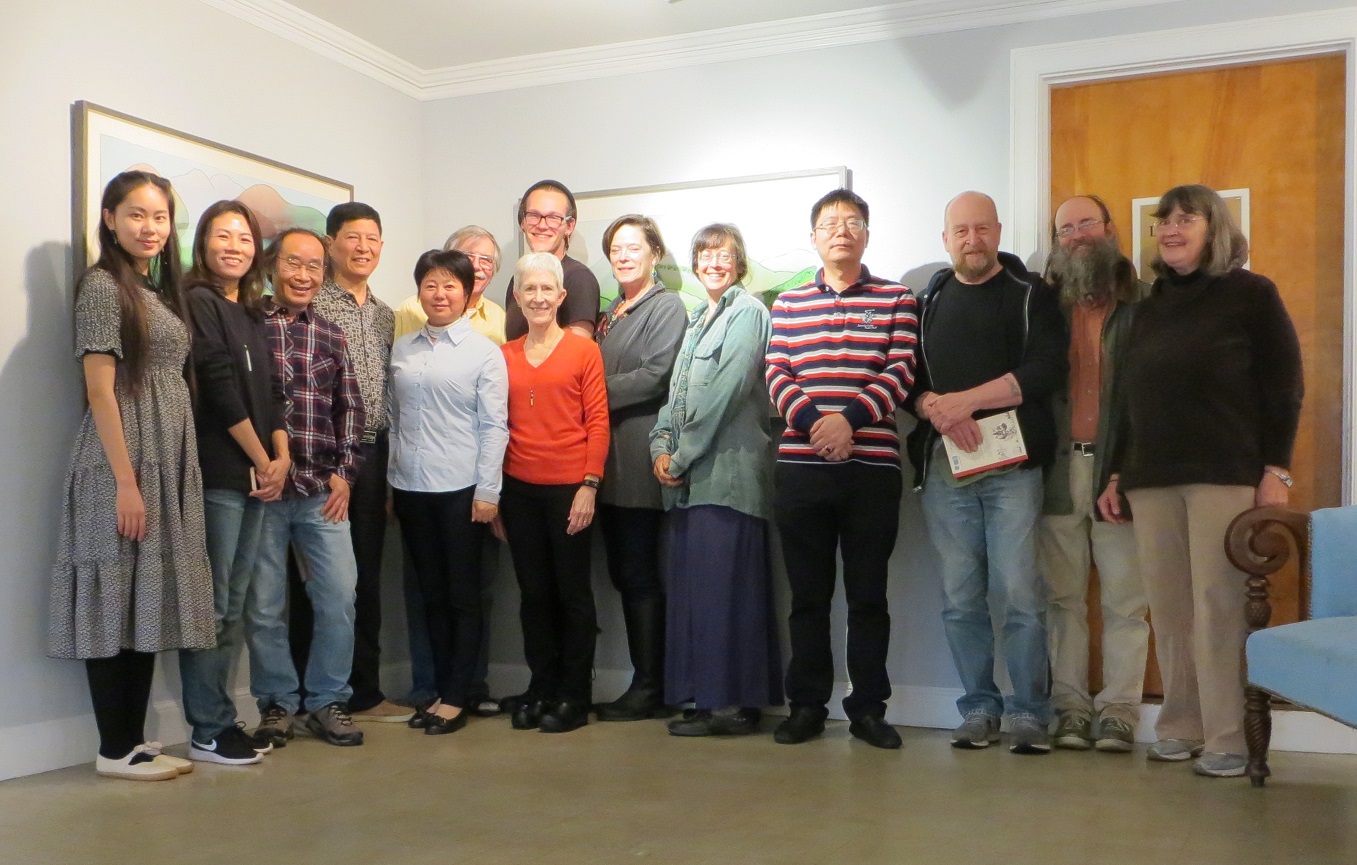 The motorized cavalcade then followed the Contoocook River north to New England College in Henniker, New Hampshire, where the symposium itself began Monday morning, October 28, with an American renga creation. The American renga is an evolution of Massachusetts poet Steven Ratiner’s renga creation using written language in place of calligraphy. The American renga adds three-brush stroke glyphs to a mathematical call-and-response progression among a group of poets. 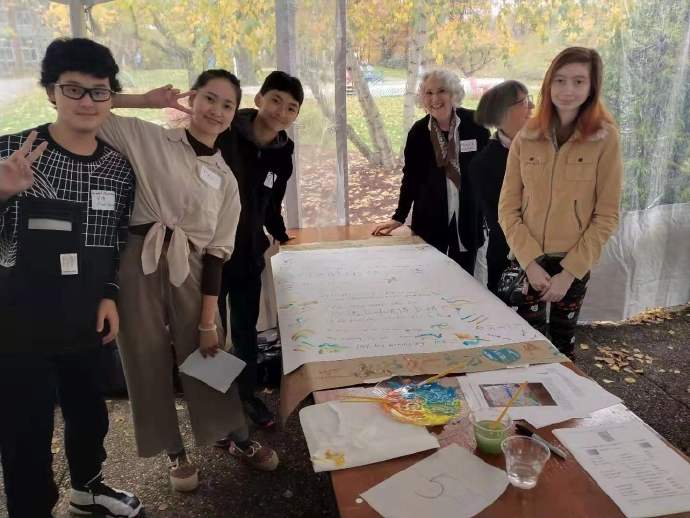 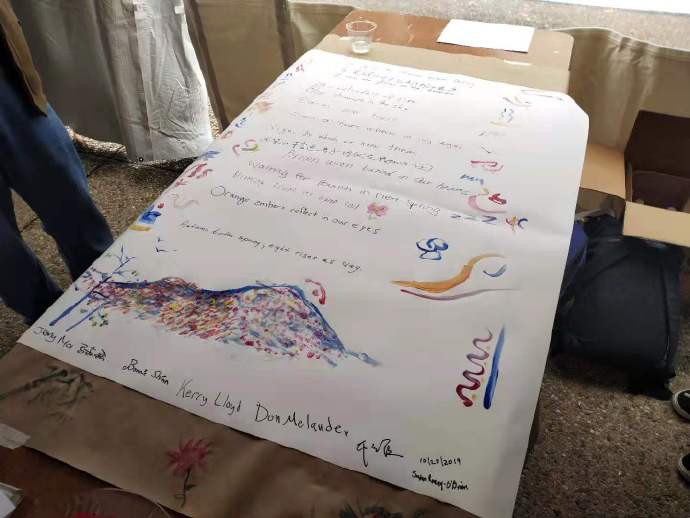 One of the eight finished rengas created that morning.
Following the renga ceremony, held in a tent outside The Simon Center, came the official opening pf the symposium with a welcome by New England College President Michele Perkins and an exchange of gifts, one of which is shown below. 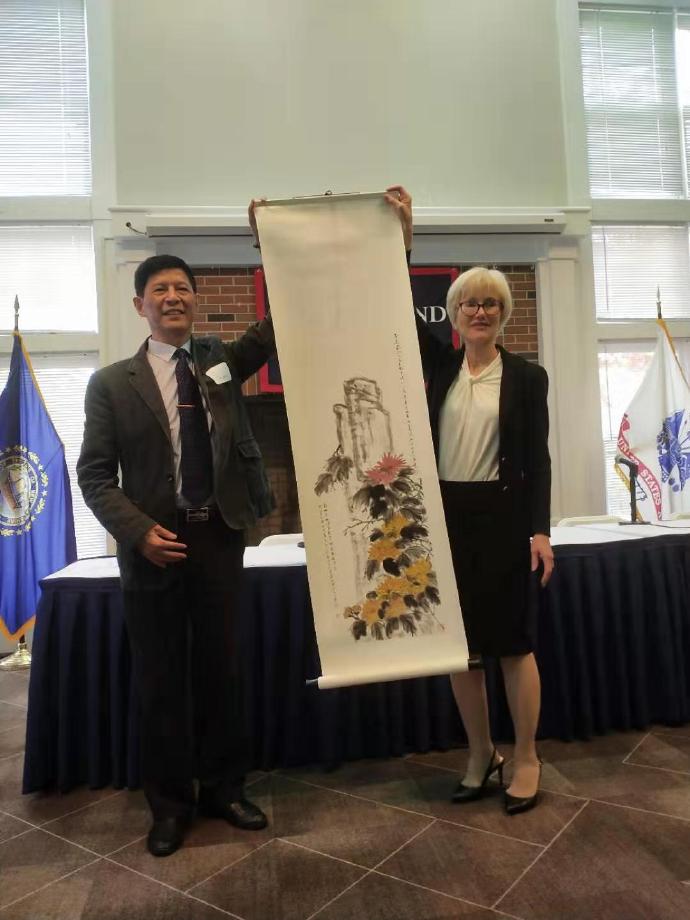 The afternoon comprised of sessions in both languages including a session on Chinese poetry and a Worcester Review panel on how American poets re-purposed the pastoral tradition which permitted them to move into the 20th Century with a strong environmental theme whose impact laid the framework for the 21st Century poets of the Anthropocene such as Gary Snyder. 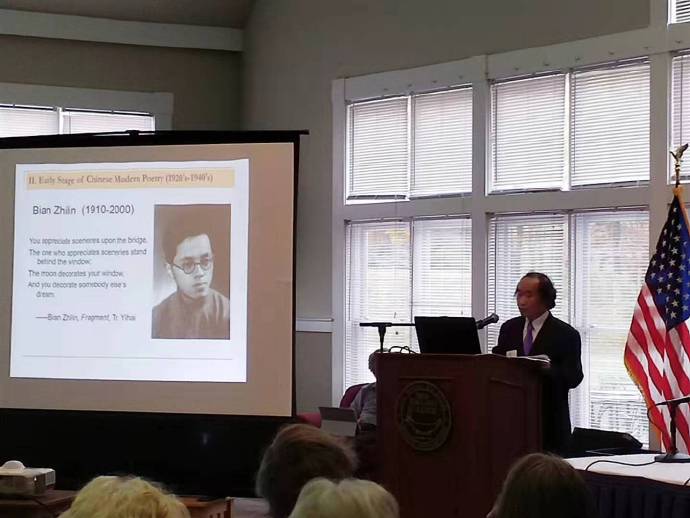 Poet and Scholar Chen Yihai of Yancheng Teachers University speaks of the pastoral tradition in China.

Zi Chuan began October 29 with a panel on archiving poetry in both nations and a morning workshop on calligraphy. This was followed by a visit to Keene State College, sit of the 2017 symposium) and a dedication of a calligraphy in Hale House. The afternoon was a all home-grown lunch at Mark Long’s West Chesterfield followed by a tour of New Dawn Organic Farm and the organic farm of Kim Peavy in Westmoreland where the farming is done the old-fashioned way with draft horses. 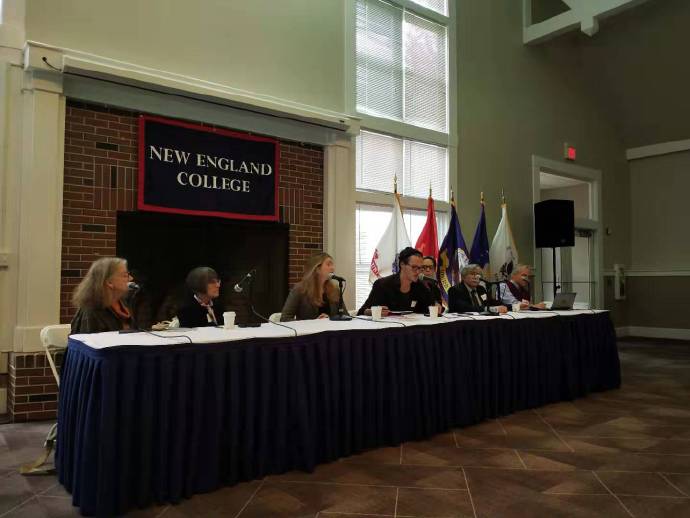 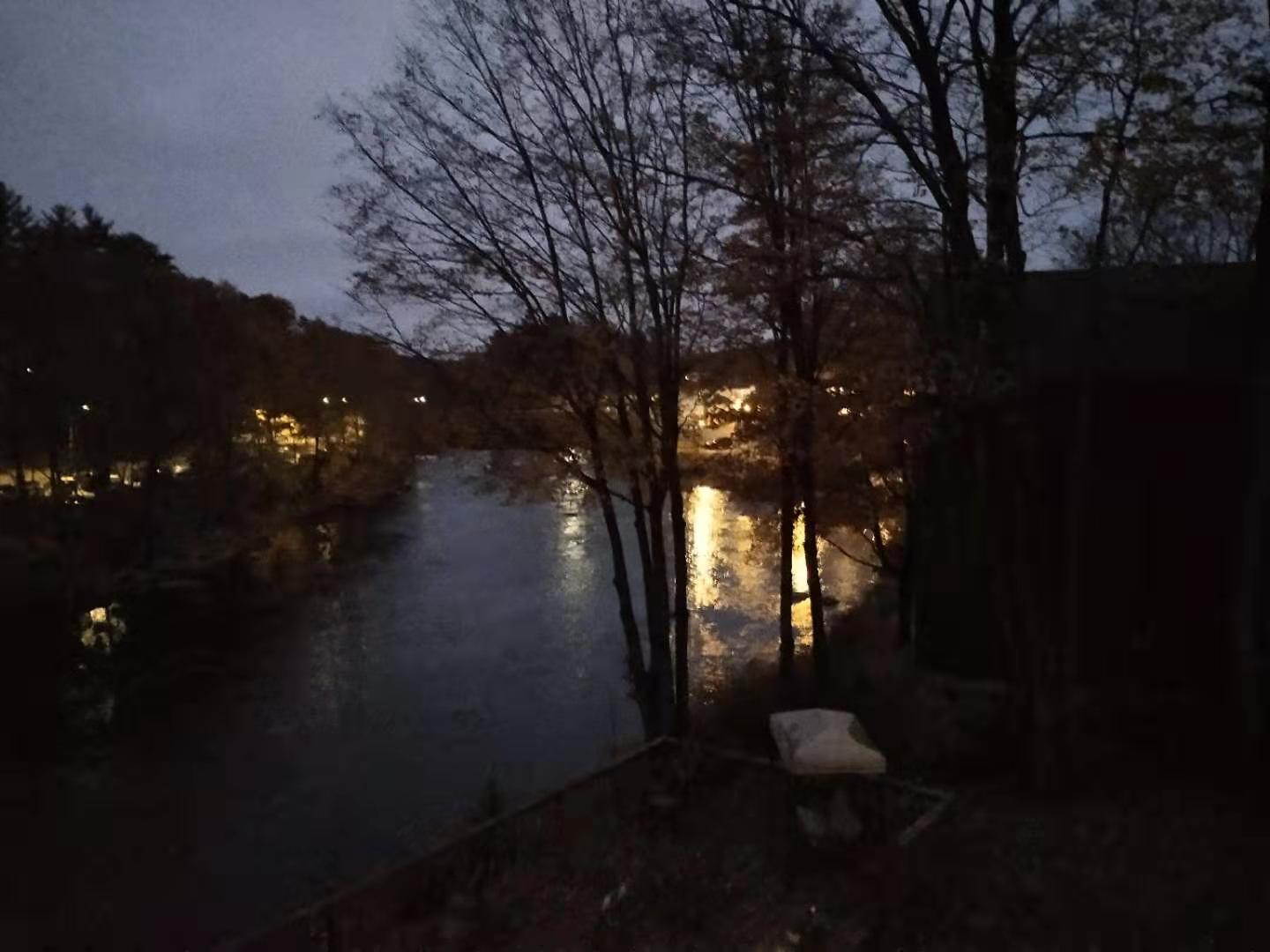 The poets from China spent their evenings at The Henniker House B&B with a meal at Daniels, both on the banks of the north-flowing Contoocook River where indeed, as Frost put it, the “rivers were made … in heaven.”

The White Mountain portion of Poetry Bridging Continents closed with a morning session by Inez McDermott on visual art in The White Mountains. In the evening, the poets provided a second dual-language reading to a full house of hikers, and visitors. This time the weather cooperated.

The poets left the Mountain View Grand Hotel in two cars and headed straight east on a five-hour journey through the forested interior of Maine, including a forced stop while deer crossed the highway somewhere in the vast hinterlands of Western Maine. The destination was a tiny hamlet in Down East, Maine called Dennysville where the visiting artist group participated in a reading/music/calligraphy event at the Atelier LaForest run by Melinda Jaques. Dennysville has a total population of about 350 and it seemed most of the town had participated. This was followed by an evening reading in a most remarkable lounge in the Benjamin Lincoln (George Washington’s second-in-command) House a short distance away from the gallery. 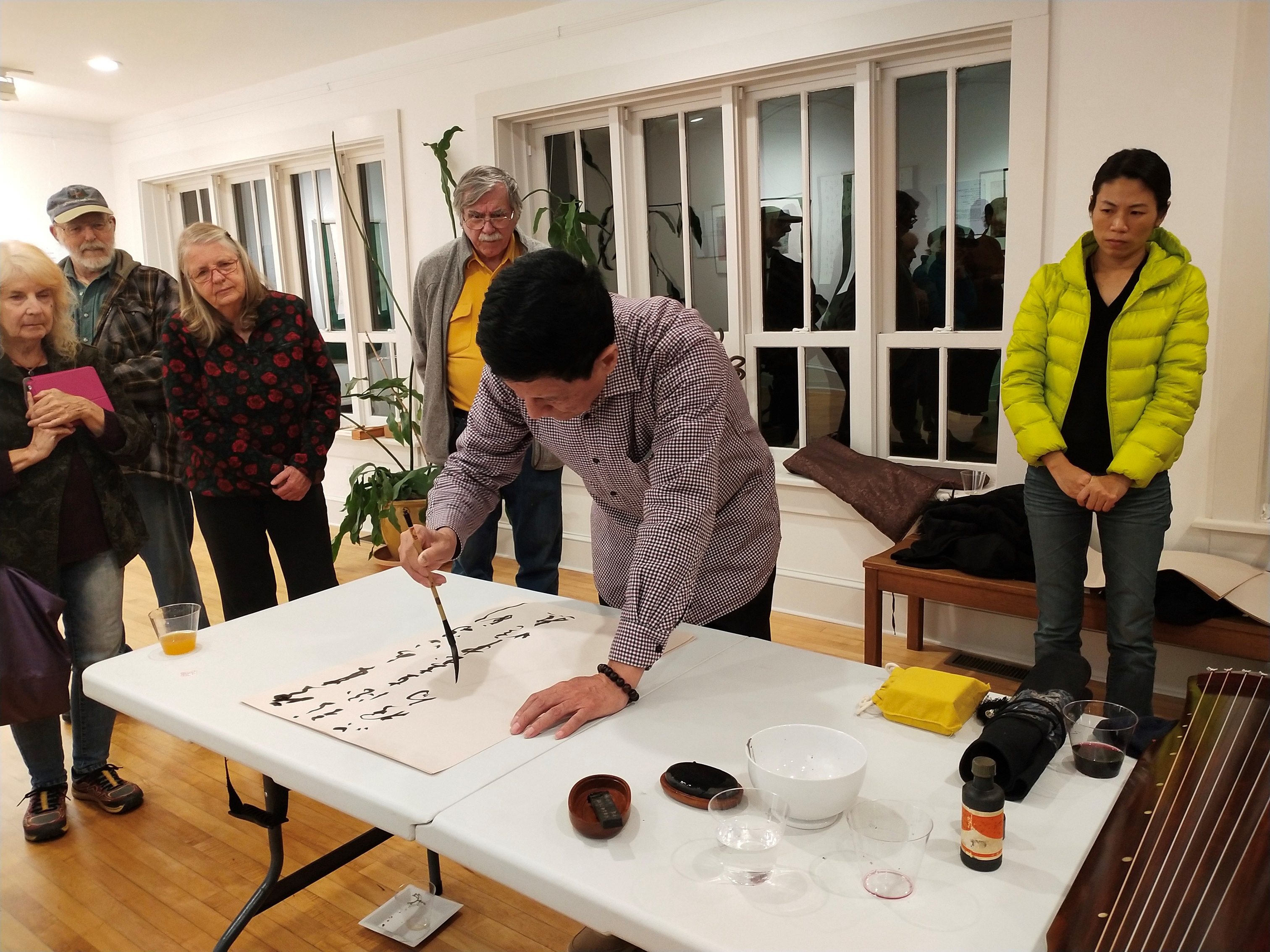 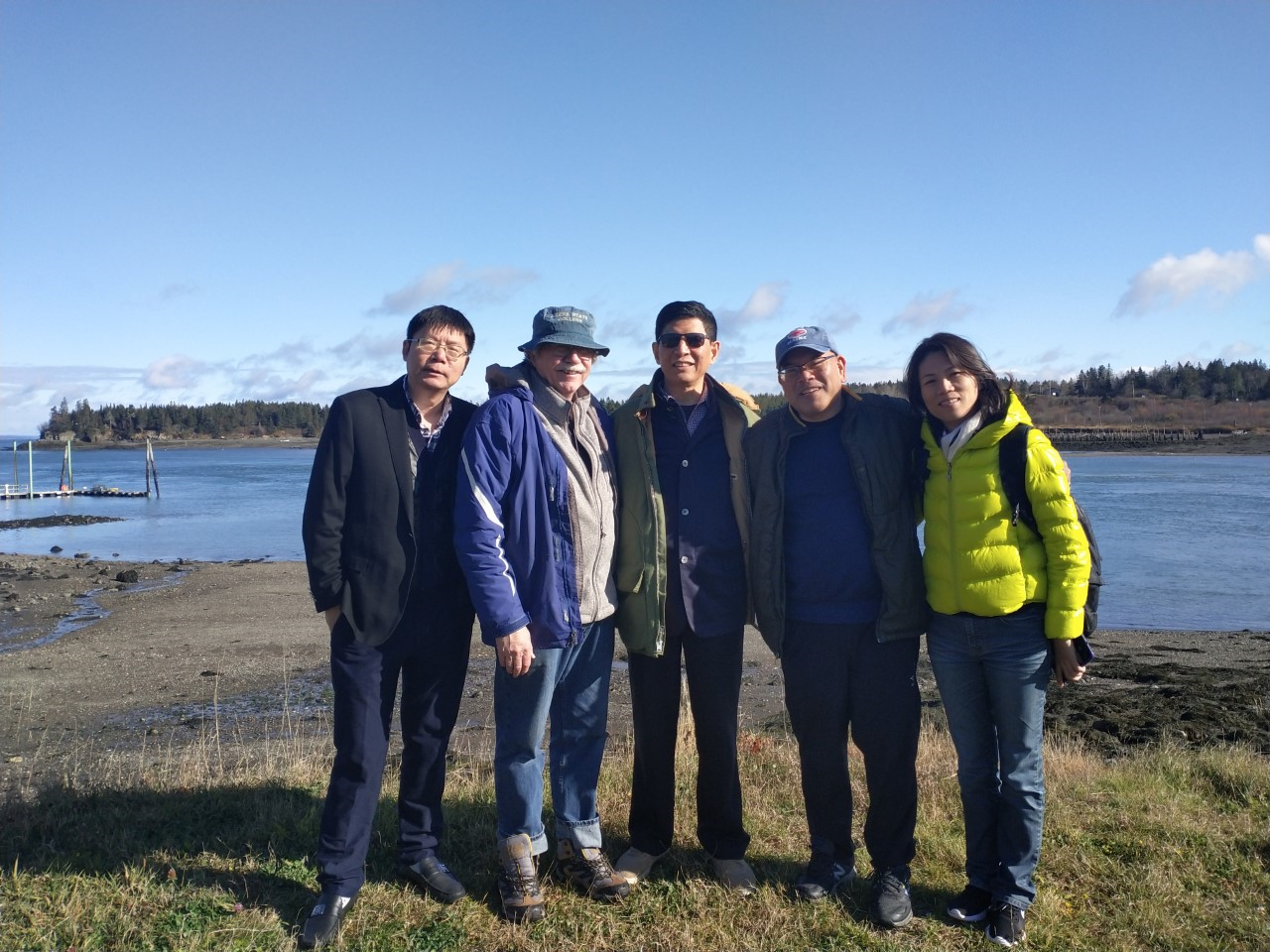