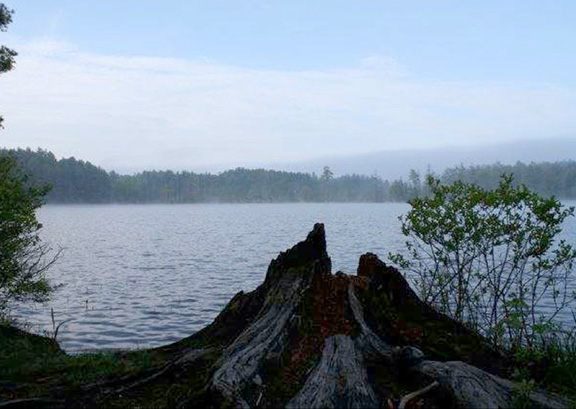 Otter Lake in the Morning / Photo by Clair Degutis

At first the beard – Rip Van Winkle long – is what one sees of the poet who sits in the Adirondack chair. Then one sees a small amusement in the mouth. Dan Lewis is self-effacing, and at the same time respectful of this poem in his hand. Jim Beschta, the poet’s mentor, sits opposite and asks, “Why did you do it?” about the last line of the poem.

Jim is exploring the connections among Dan’s images. Using a wide brush like the woman in the poem they are reading, Jim says, “People who can hear you, listen from the heart.”

“Yes,” Dan says. He explains, “I want a poem to be co-owned. It want it to sort of stay in your mind.” His poem is “After the Internecine Wars.”

Dan explains, “Store. It’s that very mundane word I wanted to end on.”

The poets are in the New Hampshire woods. Some arrived after dark and could hear the call in one of Rodger Martin’s moon poems, “Along the Monadnock Watch,”

We are a dozen, mentors and mentees at the Monadnock Poets’ retreat. And like
Dan, we have brought the economic woes, grief, and courage into the deep woods here on Otter Lake outside the small town of Greenfield. Our poems cross borders and echo from country to country, across both nation states and countries of the heart

A long porch high above the ground and with a circle of Adirondack chairs becomes the gathering place over the three days of the retreat. One night Rodger tries to remember how many years the poets have been gathering. “Twenty-one, twenty-two,” he guesses. At first we gathered for readings at Del Rossi’s Trattoria in Hancock, NH. Now for six years Rodger has organized weekend retreats based on Adelle Leiblein’s Poor Poets retreats in Andover.

“It was because of Jim Beschta,” Rodger says. “In 1989 he said he had no reason to write. He was ready to throw in the towel. I said we can’t have that. We grew up together as writers, John Hodgen and Jim and me.”

Something else happened at that time – Rodger became managing editor of the Worcester Review where Susan Roney O’Brien was a reading editor and I published my first story.

Rodger brought the group together in 1989 at Del Rossi’s with the stipulation – everyone must read something newly written. This would keep Jim honest and compelled to write. Rodger invited John Hodgen, Jim Beschta, Susan Roney O’Brien, Adelle Leiblein, Rodger himself, and me. Our instruction: read something new, something old, and something that’s the poet’s choice.

Jim’s story is slightly different. “My personal feeling is that Rodger’s account is
one that has grown mythically with time. I have absolutely no doubt I said something like that, probably more than once. How serious was I? I have some doubts.”

But that’s our story. And Rodger’s rule still sticks.

The question might be now, why do we still meet? We are not intimately involved in each other’s lives. For some of us, we see each other once a year, in May, in the New Hampshire woods.

One reason could be the grumbling respect among us. After Rodger directs all of us, including our curmudgeon Jim, to participate in the opening renga writing assignment, (Jim: I don’t like anybody telling me what to do.) Jim writes an excellent renga with his collaborators. An American renga is based on a Japanese form requiring a set number of poets, a master, painting of glyphs at the end the lines, and toasting, all in a mathematical order to create, in eight lines, a luminous truth. Here’s one: 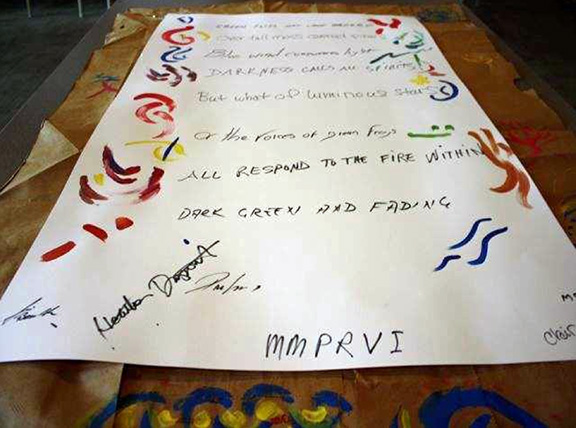 And more respect. For 30 years, Susan has been an editor for the Worcester Review. Dan has designed and laid out the journal. “I send the first layout to Susan,” Dan says. “She knows how to shape the issue.”

“There’s a fabric,” Susan says. “I can always see the fabric of the poems, the pattern they make and the way one leads to another. I can’t see it for my own poems. But I can with others.” She laughs. “Sometimes I hide a poem in the middle.”

About Dan she says, “He is such a good poet. He doesn’t know how good he is.”

Tucked away in small rooms or outdoors beneath the pines and laurel, poets work in pairs or small groups. Susan inspires new work in small group workshops. Dorothy Anderson describes a new poem she made the first morning with one of Susan’s techniques. “First you come up with an adage. Mine was, Make a mountain out of a molehill. We had to change one of the words. Then Susan gave us 10 words. We had to chose 6 to put in the poem. It gave me the structure to work with.”

The words: cliff, needle, voice, whir, blackberry, cloud, mother, lick. With only 10 minutes to write Dorothy composed a dreamscape of a mountain she must climb.

With different words, Linda Warren wrote a poem from the adage, A rolling stone gathers no moss, referencing headlines of the day.

Susan arrived for the retreat with many new poems. She is reaching into history to create a series about the vanished Minoan culture on the Greek island of Santorini. In “Cradle and All” she writes, “Where did they go/ the Minoans, before swarms of ash/

descended, before the lava flow,/ before the mountains themselves/exploded, and

Outside the main lodge, John works one on one over the days of the retreat with his mentees, Clair Degutis, Kate Zebrowski, and Heather Dupont who have brought in poems for critique. John says he likes to enter the poem as the poet reads aloud. “I never want to read in advance. I want to enter for the first time with the poet. If they want to do back story, they can. I try to be as sympathetic as I can be. I want to imagine myself in Barnes & Noble reading a book, opening the page to their poem.” He pauses. We are walking. He is a careful teacher. John has a wicked sense of humor and sometimes his eyes fill with mischief and he offers a pun he cannot contain, yes, shameless, and he cracks us up. But with a student’s poem he is most earnest. He asks himself, “What am I free to praise?”

Several of us walk to Otter Lake after the morning workshops. We walk in a hemlock and white pine forest on trails where trillium and other spring woodland flowers bloom. A pink lady slipper is new and lush sprouting up from a bed of pine needles. To John it brings a memory of a moment with his mother, father and brothers and a poem he once wrote.

Later he read us the poem. It has a long title, something he often apologizes for with his poems – “Upon Being Called Mature and Together, on Respectfully and Summarily Rejecting Both Descriptors and on Suddenly Remembering the Best Night of My Life.” The poem climaxes on the image of a lady slipper.

the pink pouches, the little hearts of my family,
mature as it would ever be, and together, just this once.

For our part, Robert Steele and I focus on creating a bit of performance fiction around the theme of story, a sort of call and response to each other’s work. First we write in response to the e.e. cummings poem, “Maggie and Millie and Mollie and May,” as sung by Natalie Merchant in her album Leave Your Sleep. The poem ends with the line, “For whatever we lose (like a you or a me)/ it’s always ourselves we find at the sea.”

Within Robert’s novel, East Wind West Rock, a character’s life-time journey is to find the truth of herself. He writes about a character, “She can’t locate the story. Maybe the story is about the spaces between.”

In response I read about a story that rolls like the warning beat of a drum from my verse novel The Good Braider, set in Southern Sudan. I read a verse about a girl who has suffered a tragedy of war that brings family shame.

And we write these days. Rodger sits, surrounded by colorful rengas hung on the walls. Kiri Te Kina sings from the boom box. He’s working to sort out a line in his poem “Summa Cum Laude.” Robert and I puzzle over the line with him. The poem comes from Rodger’s visit to a home in Gettysburg where, as he writes in the poem, “dark color stains the wide pine boards.” The stain is of the blood of wounded soldiers, both Confederate and Union, who lay across these boards. The line causing Rodger grief begins, “Between the mirror spatterings of rain/ one by one they receive certification…” He has accented the syllables and knows the rhythm the line must have. But something is wrong.

Why ever we came, we do find something of ourselves by the end of the retreat. Some truths muscled their way in the door, as Dan Lewis wrote in his poem.
Susan knows she can write a poem with a line John gave her. She read it to us, a poem of tragedies called “Shrapnel.” The line: “At Virginia Tech, cell phones rang from the back packs of the dead.”

Clair, who is working on a collection Goddesses of Small Places is reaffirmed that these people she’s writing about are real, that she’s getting to the heart of them

Dan said, “I vastly improved a poem by removing an unnecessary syllable.”
Heather gave voice to military veterans and listeners felt her compassion.
Rodger sorted out his line. He got rid of it. The poem didn’t need it.
Kate Zebrowski has a newly revised Dublin poem she’ll read at the Fiddler’s Green.

Pat Fargnoli, former poet laureate of New Hampshire, joins us the last day. Seeing
her adds grace to this work. She writes in “How This Poet Thinks”:

We believe he is writing a poem. 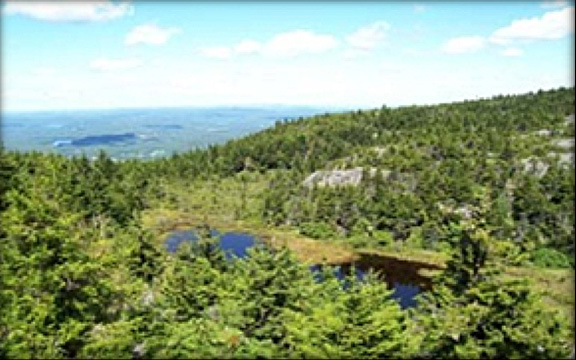