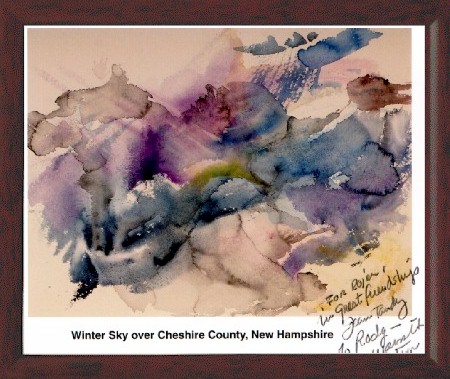 Some background by Rodger Martin….

First let me provide a brief history of what we
now call The Monadnock School of Poetry Workshop meeting monthly at Del Rossi’s
Trattoria in Dublin, New Hampshire.  The workshop began over twenty years
ago at The Meeting School in Rindge.  It was a group which included myself,
Gordon Korstange (who now lives, teaches and writes in Saxtons River, Vermont),
David Patterson of Mount Wachusett Community College and a few others.
During the next ten years, the workshop has met in  The Jaffrey Inn, the
Fitzwilliam Inn and occasionally a member’s home but the idea of an inn seemed to
work best because it provided a neutral backdrop plus occasional food and
drink.  When Del Rossi’s opened in 1990, their central location, commitment
to the arts, and good food provided the stable meeting place for the workshop
which then spawned the Poetry Sextet and all that has followed.

The workshop itself follows the standard concept
that those bringing work are looking to publish that work and response is
provided with that in mind.  First, the poet is not permitted to speak
except in answer to questions of fact.  Each member of the workshop
receives a copy, the piece is read twice– once by the author, once by another
member of the group.  Then criticism, often lively and dissenting, is
provided as if the piece had just been read in some journal.  The
discussion usually is not so much directed to the author as to each other with
the author bearing the responsibility to note those thing he or she feels
appropriate.   Once the discussion has exhausted itself, the group
moves on to the next piece.   In order to prevent the poem from
becoming too molded by others, we discourage the poem ever being brought back to
the group except as we may hear the revision during or for a reading outside the
workshop.

The workshop has does an annual reading at Del Rossi’s each
spring in conjunction with The Monadnock School  Writes of Spring
series.  On the following pages are poems by the current members of the
workshop that have wended their way through the process.

In Pursuit of the Loon

The loon’s slow echo reached me,
Hands that cupped my ears in sobs,

My grey raft swelled silent in the slate marsh,
Each oar carefully placed and drawn
So that I moved like leaf in stagnant pond.

The loon knew but stayed
Always at the edge of vision.
Like a ghost he beckoned till I closed
Then submerged leaving an image which vanished like vapor.

Seconds primed ages and he emerged without a ripple
In a more distant place he had not been before.
He soothed, a siren of loss.
His black-and-white-lined throat seemed
Stark against the sifting curtains of grey.
His eyes glowed red as he called,

It echoed to hills hidden in mist and returned;
It filtered the shore in riffles that wash and restore,

I am in my office straightening the mess
in my IN basket so that to all who enter
it appears I know exactly what I’ll be doing next,
when, suddenly, through some force of memory

or miracle of my olfactory, I am reminded
of my grandfather’s lentil soup. The smell of it
wafts through the doorway and across my desk
as scantily as a negligee. I imagine someone’s

cup of soup with his face on it, his Lebanese nose,
his lips permanently formed around the letter m.
I imagine his thick, brown broth bubbling
in a pot on a gas stove, the lens-shaped

seeds swelling with the flavor of his world –
lamb meat, grape leaves, unleavened bread
and lentil soup – until I hunger for more than lunch,
for a sea-side cafe in Beirut whispering the histories

of the Phoenicians, the Ottomans, Christians
and Druses. My waiter brings me a bowl
of hot soup. I thank him in Arabic as a breeze
from the sea blows the steam from my spoon.

Contentment has his hand on my mouth
stifling my screams and dragging me down
to a green land
a land of pastured sheep and cudded cows
a land of brooks and maple trees.

My heartbeats slow and my eyelids droop
my limbs loose in the meadow grass
and I am nearly asleep.

The hawk keens on columns of sky.
Its shadow scythes the stalks
slashes a flicker across my face

but the grass has entwined through my fingers
and I am bound to the ground
dreaming
the sun sliding into the horizon.